Punch Up Your Workout Routine Like a Champion Fighter

You’ve never seen an out-of-shape boxer. Not one. They’re all in amazing shape – the finest physical specimens the sporting world ever produced. Lean like professional basketball players but with the strength and endurance of football players, boxers are the best of both worlds.

How’d they get so strong and agile and tough? Watch them work out. The boxer’s exercise regimen is intense – a unique combination of strength training and cardio that develops every muscle group and transforms them into lean, mean fighting machines.

But you don’t need to be an elite fighter to look one. At RockBox Fitness, our training programs provide boxing-based workouts worthy of a Rocky montage without all that getting punched in the face stuff. It’s hitting without getting hit. The results? Increased muscular strength, improved cardiovascular fitness, stamina and balance. 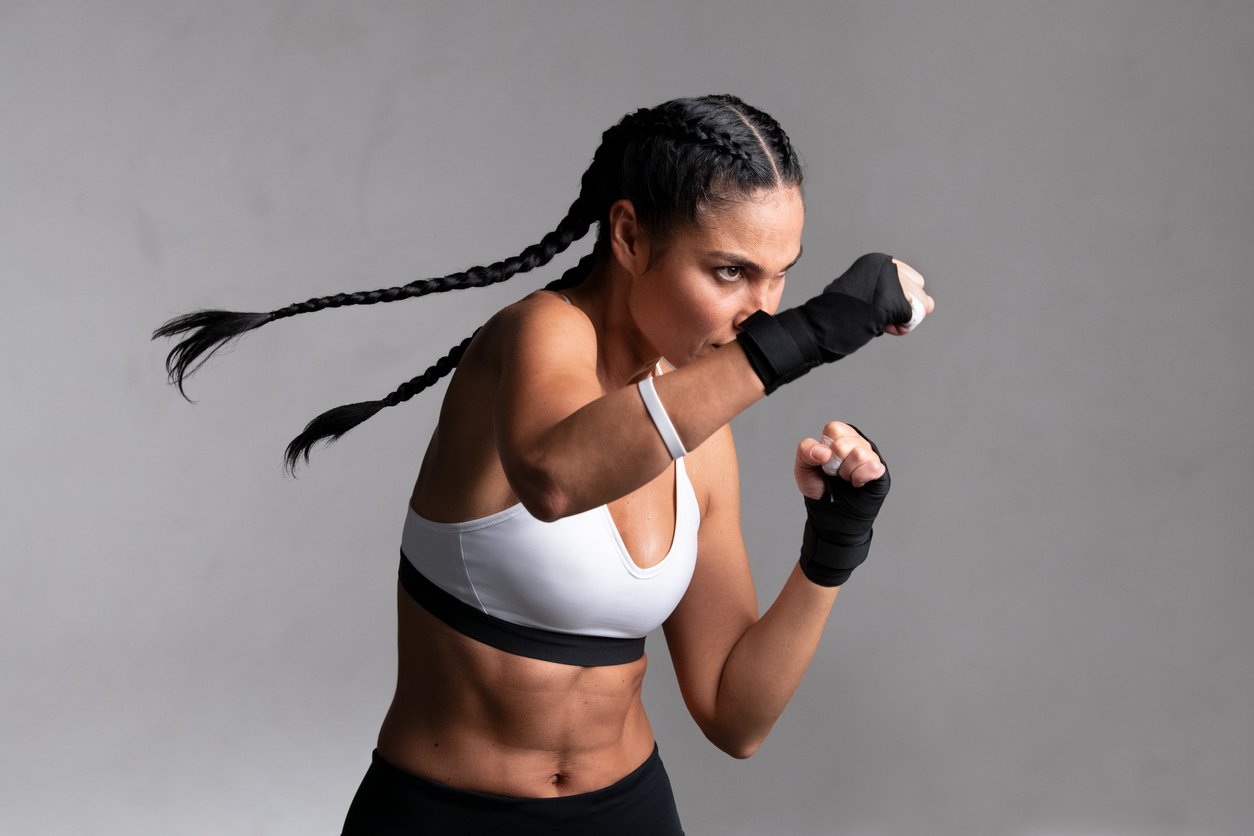 Boxers Are Strong, Head to Toe

Throwing a good punch is all in the arms, right? Not even close.

A boxer develops explosive strength in their legs, abdomen and back to land heavy, sometimes devastating, blows on their opponents. Think of an Olympic sprinter springing off the blocks or a defensive lineman lunging to sack the quarterback. They generate much of that power at their core. Same with a boxer. Behind every good punch is a dozen different muscles working in unison to deliver a powerful blow. The force generates at the balls of the feet, winds at the hip, turns through the torso and extends through the deltoid, triceps and, ultimately your forearms and fists. That’s how some of the world’s best boxers have 10 times the punching force of the average Joe.

Punch repeatedly with proper form and you’ll quickly understand how boxers burn up to 1,000 calories an hour working a bag. It’s an intense upper and lower body workout, plus rapid movements for rigorous cardio. The bag is at the center of our training program at RockBox Fitness. Following our expert trainers, you’ll hit and kick and kick the bag to torch calories, strengthen your core and develop better balance and coordination.

They say strength without speed is nothing. Nowhere is this truer than in boxing, a sport that requires quick reflexes on top of sheer strength.

Obviously, hand speed is key to holding your own in a fight. Boxers develop this through a series of drills: clap push-ups, dumbbell shadow boxing and all-out speed punching. But they need to have lower body speed, too. Quick footwork comes from skipping rope, box jumps, agility ladder exercises and running. A good boxer should be able to maintain a fast pace for up to five miles.

In 1813, British sports journalist Pierce Egan described boxing as the “sweet science” because the sport required fighters to outthink their opponents and anticipate their moves (some have even compared boxing to chess, no joke). In short, boxing is strength conditioning for the brain.

The best boxers are intensely focused, disciplined, confident and master their emotions. They’ve developed the mental agility to make split-second decisions and sound strategies, while training their bodies to respond with lightning-fast reflexes. You too can gain these traits without ever going toe-to-toe with someone in the ring.

Our dynamic group exercises will keep you engaged and your mind stimulated because we’re always mixing things up. During a 50-minute session, you’ll circulate through different boxing stations while also using kettlebells, dumbbells and other equipment to target specific muscles. No two sessions are the same because changing up your routine delivers better results. Boxers have known this for years.

You’ll also benefit from our trainers who will challenge you to tap into those deep reserves of strength where you’ll find your fierce, fighting potential.

Ready to train like a boxer? We offer several different memberships that will meet your needs and schedule. LET’S HIT IT!